Being Someone Else’s Wife 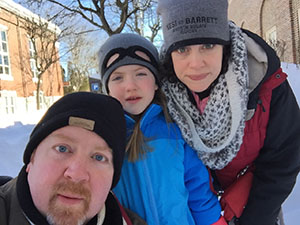 It was back in February that my husband and eight-year-old daughter were getting ready to come to Lowell. An MRT staff member and I were in the kitchen during a rehearsal break, talking about what it’s like for a spouse to watch you play spouse to someone else onstage. I think it’s a question a lot of people wonder about, and in Oceanside I have two husbands (current and ex) so it’s double the experience!

While I can’t speak for all actors and their partners, Doug (my real-life husband) has said that when he sees me onstage in a romantic scene it doesn't make him jealous—but he does feel hyper-aware about what other people are thinking about how he feels watching it, especially in an audience with friends or family (i.e. my Dad & Mom!).

Whenever you’re watching a play, there can be a sense that actors are sharing moments of personal intimacy and knowledge usually reserved only for their partner. So to witness even a little bit of that in public can be strange. In our almost 20 years of marriage, Doug has seen me do a lot of truly unspeakable, provocative and/or disturbing things on stage. He initially mentioned his self-consciousness when I appeared nude onstage in a production of A Clockwork Orange (which—spoiler alert!—is not going to happen in Oceanside). 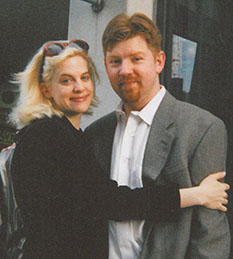 For me, any kind of sexual scene or kissing is like stage combat: it's blocking you learn technically. It's not real, just like you don't really punch someone in stage combat. But of course for the audience we want it to read as real. And with punching, you don't make contact. With kissing, however, you have to. So it’s real and unreal at the same time, and in that way, it might be easier for a partner to watch the other components of a relationship on stage—the fighting, the making up, the manipulating, the inside joking—than to watch the physical interaction.

There is a necessary detachment because you have to stay aware of all the other parts of the scene. But of course you want to stay present, too, for the chemistry to read. You want it to look sexy.

Oceanside has some intense moments, and a question that's been coming up at our Thursday night post-show discussions has been about how we must all be really spent after a performance, because it’s so intense emotionally. My response has been that initially in rehearsal, I thought, “Wow. How am I going to get through a 5-show weekend?” But now… I mean, there is always a sense of elation after you finish a performance and a stamina you develop, no matter how demanding the role. But what has surprised me with this is I'm finding such a deep sense of satisfaction at having really gone through something with my fellow actors and with the audience.  Rather than being wary at the prospect of jumping back into the difficult world of this play, I can’t wait to get back to it. Instead of being wiped out afterward, it's actually energizing and immensely fulfilling. Theatre challenges us to straddle the divide between fantasy and reality. For an actor (not to mention an actor’s family), it’s all about finding your own personal balance.

But right now, I am grateful for a couple days of R&R!

Photos: (Top): Carolyn, Doug, and their eight-year-old daughter Acadia in Lowell during the run of Oceanside at MRT.

(Bottom): Carolyn and Doug following a performance of Big Love at the Actors Theatre of Louisville, 2000, as photographed by Carolyn’s mother Bernice Baeumler.”