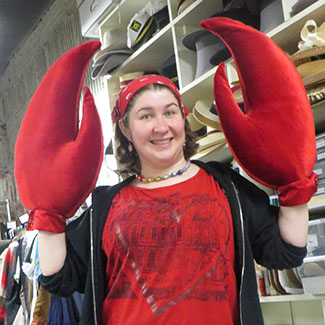 Lee always loved Halloween as a kid, so her role as manager of MRT’s costume shop doesn’t come as a surprise. Among her loves today is building period costumes from scratch, and she gets to do it several times a year for MRT, particularly when the company puts on a period play: clothes from before 1960 are hard to come by, and those that have survived won’t hold up to the demands of a life on stage, show after show, dry cleaning after dry cleaning. That means a lot of hard but rewarding work for Lee. Among her handiwork is the dress worn last season in Talley’s Folly, designed by Deb Newhall.

Upon taking on the role of shop manager five seasons ago, however, Lee realized it wasn’t going to be all Halloween, all the time. Her role is to facilitate the costume designer’s vision; and since MRT does so many shows set in the present day, that often means more shopping, organizing, and maintaining order amongst the chaos than building from scratch. “To keep a shop like this running, it takes a lot of organization more than anything,” she says. “It’s more about weeding out what we don’t need.”

Even so, her duties come with their fair share of puzzles to keep things interesting. Most of her work comes during tech week, and in that last push before opening, the design elements don’t always jive as the production comes together: once, an actor’s costume so closely matched the color of the set that “he looked like a floating head.” Needless to say something had to be done, and it was Lee to the rescue. During tech, 16-hour days (and occasional overnights) are not unheard of.

Somehow she still finds time to design her own kids’ clothing line, knit, and play the Ukulele.

Though some days are more paperwork than fabric work, “What makes your job worth it,” she says, “is to find the little challenges. Little tiny details make me really happy.” Sometimes that challenge is making a dress that can accommodate a stage vomit rig for God of Carnage. Or sewing giant lobster costumes for Half ‘n Half ‘n Half. But whatever it is, her inner Halloween-lover still gets its chance to trick-or-treat.